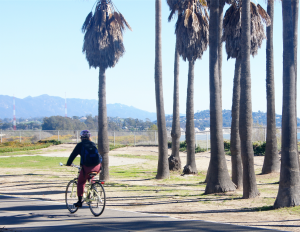 UC Santa Barbara is one of the best schools in California for biking - well built paths and roundabouts make biking to classes a breeze. Students from both the residence halls and Isla Vista regularly bike to campus and many forgo owning cars due to the convenience of biking. But undergrads aren’t the only ones taking advantage of our local infrastructure. Staff, faculty, and graduate students also get in on the action despite barriers like distance working against them.

May is recognized across the country as National Bike Month, and Santa Barbara in particular coordinates CycleMaynia, a month-long series of events for the community. With incentives like bike to work breakfasts, electric bike demos, and team-based challenges with prizes, the city of Santa Barbara goes all-out to encourage its residents to get back on their bikes. As such, we wanted to highlight one grad student, staff, and faculty from UCSB who have biked to work for as long as they can remember. These individuals bike for a variety of reasons - environmental, fitness, and economic savings among them. But one thing they all have in common is they can’t stop talking about how much they enjoy it!

One notable grad student is Crystal Bae, a Geography PhD student who has been biking long before she came to Santa Barbara. When she worked in Washington D.C., she had a 15 mile bike commute each way and biked to work 2-3 times a week. Biking was a better alternative than public transportation, she said, “[B]ecause there’s no risk of missing the bus. It’s a more stable commute.” When she came to grad school in California, Crystal was astonished by how deep car culture was ingrained in the area. “Owning a car was almost a given,” she said, adding that most people she knew drove almost everywhere. But Crystal continued to bike to work, despite the near universal call for car ownership. She cites a number of biking’s benefits, including fitness, reduced carbon footprint, avoiding cluttered parking lots, and convenience within campus (i.e. getting to the UCen from Ellison Hall). For Crystal and many other grad students, biking to campus is the sustainable and healthy choice.

Similarly, UCSB staff member Donna Baumann has been riding her electric bike to campus for over 13 years. Since she lives fairly close to campus (approx. 4 miles) and Santa Barbara has good infrastructure, biking and driving take approximately the same amount of time. Donna highlighted the “mini-workout” to and from work as a great way for people with desk jobs to stay active. Additionally, she touted the spiritual benefits of biking providing a time for reflective gratitude. She went on to say that biking “is a great way to unwind and transition from your private life to your work day and back.” While she acknowledges that environmental impact is an important reason for biking to work, her primary motivator is the joy of being in nature. Biking to work comes with some challenges - this year’s notably inclement weather has made trips either mildly frustrating or straight up impossible. For light rain and mist, Donna uses an all-weather jacket, but she resorts to riding the bus or driving during all-out downpours. It’s not always the easiest path to take, but those who bike know it’s worth it.

Lastly, we have Ken Hiltner, an English Professor with an appointment in the Environmental Studies department. Professor Hiltner rides an electric bicycle (e-bike) to campus primarily for the environmental and cost benefits. Hiltner is very self conscious of his own carbon footprint as well as the true costs of owning a car. According to statistics he provided, “25% of America's greenhouse gas emissions come from cars, and each car a family owns accounts for approximately $9,000 in yearly costs.” He was also very appreciative of UCSB’s infrastructure, as he is able to charge his e-bike using the solar panels on campus to further reduce his own environmental impact. Keeping the bike at a full charge means that he doesn’t have to worry about getting tired and sweaty when overcoming steep hills - a common complaint people have about biking to work. Ken added that he would like to see more e-bike promotion since they are much more affordable than electric cars (the average electric bike costs $600 on Amazon compared to a Tesla Model 3’s $35,000 starting cost) and eco-friendly (nearly 100x less batteries and production are required to make an e-bike as compared to a Tesla). With all the mental, physical, economic, and environmental benefits of biking to work, Ken is confident that there is really “no reason not to [bike]… we just need to get out of the habit of driving.”

And that’s what it is - a habit. The car culture that has been deeply ingrained in California and the United States as a whole has framed cars as the norm. People who bike to work are usually considered the exception as most others opt to drive. But it doesn’t have to be like this. These three individuals are only a handful of people who have discovered the many benefits of biking to work. Whether it is for fitness, fun, the environment, or the cost savings, everybody should try to bike to work more and turn “Bike to Work Week” into “Bike to Work Year.”