Blue Sky Science in the Deep Blue Sea: A Holistic Approach to an Important Mollusk

Dr. Herb Waite, Distinguished Professor of Molecular, Cellular and Developmental Biology here at UC Santa Barbara, has dedicated his life to the childlike curiosity that drives fundamental science. With his emphasis on biology, his recent research (conducted out of his lab, the “Waite Research Lab”) centers around the small but impressively complex holdfast systems within the mussel, namely how these creatures latch onto the wet dirty surfaces of their underwater homes. If you’ve ever tried to wrest a mussel from its rock at the beach, you’ll understand how tenacious these little shellfish are. Their adhesive threads require enough yanking force that when finally broken can send a small child tumbling in the opposite direction, triumphant though slightly bruised, mighty mussel in hand.

Mussels can make as many of these incredible adhesive threads as they need to in their lifetimes: the entire process of growing and adhering one to a surface takes them under five minutes, a speed matched only by spiders’ web-making.

This process inspires and motivates Dr. Waite’s research into these complex biological processes. Dr. Waite and his group of grad students, post-docs, and collaborating faculty study the mechanisms behind the whole thread, a complex stack of proteins that ultimately connect with the mussel’s tissue. They’ve characterized 25 different proteins in the threads, each with individualized functions and unique timing during deposition, he adds, “march to the beat of this little process that the mussel is using.”

Mussel’s adhesive properties are a more sophisticated and less wasteful version of dentists’ techniques. Lying in the dentist’s chair, you might notice that the dentist dries the surface of your teeth before attempting to use an adhesive. However, this act of drying, whether using air or alcohol, is never complete and risks damaging the cells needed to keep the tooth and gum alive. As Dr. Waite notes, “there’s always collateral damage with procedures like that.” The mussel’s adhesive mechanism doesn’t require any sort of drying, though it does kill the bacteria at one point to prevent them from eating away at the adhesive proteins it creates.

The aforementioned dentist would love it if they could get your braces to adhere without damaging the protective cells on the surface of your teeth and gums. That’s why dentists and many others in the medical world are excited about a key player in this process: Dopa. This amino acid is created by the mussel and is prevalent in its adhesive tissues. This is essentially the same compound as L-Dopa, the chemical whose absence is linked to the neurodegeneration associated with Parkinson’s disease. Unlike L-Dopa, however, Dopa is not a free amino acid—it’s a modification of tyrosine in adhesive proteins. Dopa is adhesive and researchers have found that the more Dopa that is included in an adhesive protein or polymer, the more adhesive it is.

Engineers at Northwestern University in Chicago conducted a study in which they took a single molecule of Dopa and measured the strength of its’ adhesive. “Engineers are accustomed to reducing the complexity of systems so that simple questions can be asked and tested,” Dr. Waite says. However, biologists take a different approach: “We suspect from experience that reducing the complexity of the system too much will lead to an answer that is biologically irrelevant.” That’s why throughout his career, Dr. Waite has taken a more holistic approach in his research.

“Really, that approach has nothing to do with sustainability,” Dr. Waite comments on the Chicago study. His reason? The engineers weren’t looking at the chemical context in which the mussels were performing this adhesive process. For example, Dopa is typically very prone to oxidation. When Dopa is oxidized, it’s very good at cohesion, namely, sticking to itself. However, when it isn’t oxidized, it’s great at adhesion, that is, sticking to another surface. In this sense, this one residue can go in very different directions: adhesion or cohesion, depending on its local environment, which Dr. Waite refers to as ‘the chemical context’.

Even examining how the mussel maximizes the usefulness of its resources shows us that we have a lot to learn from these animals. “What’s always delighted me about this ‘consumer product’ that the mussels make,” Dr. Waite says of the mussel’s threads, “is that even when it becomes obsolete, it perpetuates the natural order of things.”

Why is balancing the oxidation of Dopa so important for adhesion? During detachment, the center of the mussel’s adhesive plaque comes up off the surface (rock, bridge, another mussel, you name it) thus allowing the local interfacial pH to equilibrate with the ocean water. Under normal circumstances, this pH shift would lead to Dopa oxidation. However, the mussel actually produces an antioxidant to protect its plaque tissue from oxidation during “off” cycles so that the Dopa can rebind during “on” cycles, thus prolonging the plaque’s functional lifespan.

Dopa-containing plaque proteins detach and reattach from surfaces thousands of times before they eventually become brittle and fail, only to be replaced by new plaques and threads. Failed plaques litter attachment surfaces though their presence is transient as they are degraded by the ambient ecology. Reuse is common in nature, though notably rare in human behavior: few of our products are designed to have a purpose beyond this short functional lifetime, and most of what we produce and consume becomes obsolete but remains to vex us.

“I like this fantasy that plastic grocery bags could be re-engineered to be more like mussel threads or the leaves of deciduous trees”, he explains the life cycle of a leaf—how when it falls and is no longer used to convert light into energy, it supplies trees, microbes and decomposers of all kinds with the nutrients they need, thus still serving an equally important purpose beyond its functional lifetime.

Dr. Waite is an adamant defender of research for the sake of understanding the entirety of his subject, cringing at the thought of the profit-driven treasure hunt for ‘useful technical applications’. So the question “what are the practical applications for your research?” worries him. “I’m trained to be a basic scientist,” he tells me, “and that question is coaxing me to become an engineer. Does that mean that all basic scientists need to become engineers in order to survive? That would be very sad.”

It’s not that he isn’t interested in finding sustainable solutions in natural processes, rather it’s the fact that many people approach science through a product-oriented lens that bothers him. “The public seems to think that a scientific project does not merit support unless it has a very useful application attached to it,” he tells me. But he doesn’t buy it. “Doing any science extremely well provides us with new concepts that then are part of the encyclopedia for remaking our world.” That’s a beautiful analogy that points to the faults and gaps in knowledge and thus the increase of waste, inherent in the reductionist point of view.

We can expect to see more of what Dr. Waite calls fundamental “blue sky” science. “We can’t afford to lose our childlike curiosity. For example, I can talk about squid beaks to kids and they will always be fascinated,” Dr. Waite shares. As we get older, many of us lose our sense of wonder about the world, and we’re more at risk of falling into the exclusively application-oriented point of view. “Adults tend to think that if research leads to a new kind of toilet bowl or something then, and only then, will it have value,” he sighs. But if we can fight deterioration in imagination, there will always be hope. And this hope is what matters to us in the sustainability world: open, imaginative minds guarantee that we won’t miss important solutions, and that we will hold a central place in our collective conscious for the holistic, waste-not-want-not approach that nature inspires in us.

Dr. Waite’s note: I have collaborated with UCSB engineers since 2007 via a NSF-funded MRSEC project in MRL, “Bio-inspired Wet Adhesion”. This project has allowed me to maintain my “biology first” philosophy in collaboration with engineers like Jacob Israelachvili, Glenn Fredrickson, Craig Hawker and Megan Valentine, and chemists Alison Butler, Joan Shea and Songi Han. This diverse ensemble tested the hypothesis that, even if your research priority is creating new technology, superior technology-translation results from a more comprehensive and fundamental understanding of mussel adhesion biology. The answer is a resounding yes – our efforts are the envy of MRSECs nationwide. 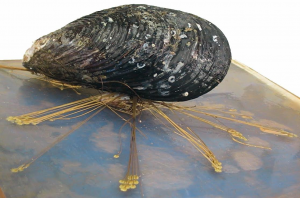