Looking at the World Through Other Eyes

Dr. Lisa Jevbratt’s studio is a flurry of ideas and sidetracked passions pinned onto the walls and covering the tables. Handcrafted dolls she molded from clay to resemble the faces of her female predecessors sat under scraps of fishnet she’d been learning to weave. Across the room hung prints comparing the colors visible to humans to those visible by other animals.

It’s as if she’s holding up mirrors to reality. She doesn’t rely on any one way of feeling, seeing, or knowing the world. This open-mindedness and endless curiosity that is inherent in her work is what makes her contributions so important to the sustainability effort. Drawing from an abundance of worldviews, Dr. Jevbratt understands that we can’t be picky or close-minded if we are to successfully develop sustainable solutions to the environmental and social challenges facing our earth. Her research investigates novel, or often overlooked, perspectives that offer more opportunities than might a strictly scientific lens.

Coming to the United States from Sweden in 1994 as a computer science graduate student, Dr. Jevbratt has been working at UCSB since 2002, and is currently working as a professor in the Art department. Most of her studies and research have involved programming and using algorithms to represent data in different ways, which helps her and others look at our reality in a fresh light. Her main interest was vested in the internet. “It just clicked for me. Programming was what I did for many, many years,” Dr. Jevbratt said. In the past few years, Dr. Jevbratt has picked up numerous skills that she stores in her creative toolbox to poke and prod at reality, building different ways in which we can sense the world. Science is one of these lenses. Spinning wool is another.

Her most time and energy intensive research so far has been looking into how animals see. Her main background, data visualization and computer programming, was her primary medium until she started teaching her interspecies collaboration class. When she started focusing on, as she says, “acknowledging the agency and presence of other viewpoints on the world,” the inevitable question eventually came up—how do animals really see? Her original idea was to create filters for Photoshop, and this idea won her a grant. In fact, Dr. Jevbratt made an iOS app for it in 2013, as her young daughter informs me, who has been perched on the couch during our interview.

The app itself, called ‘Zoomorph’, offers color filters tailored to each of animal’s 50 color vision capabilities. “We have animals that have much more precise color vision than we have, with a much higher sensibility,” shared Dr. Jevbratt. For example, the mantis shrimp has sixteen receptors, compared to our three. “Their color world is on a completely different level, even though they barely have brains. It seems like they live in a very different colored world that we cannot imagine.” There are other animals who have far less color sensitivity than we do, like raccoons or dolphins, who have monochromatic vision (they see in black and white). Other animals such as sheep have two receptors, so they can’t see the difference between green and red. She has found that even amongst animals who have monochromatic vision, there are differences in their sensitivities: animals who live on land generally tend to be more sensitive to red wavelengths, while those who live under water have more sensitivity to green light, as red wavelengths don’t penetrate water.

Dr. Jevbratt received a creative capital grant for the vision project and found herself wanting to branch out, beyond simply representing what we already know about animal vision: “That’s where I thought, as an artist…all those fine details of things might really mean something.”

The concepts of “science through art” or “using art to better understand science” are commonly repeated, but simplifying art’s value down to being most useful when serving as a tool for scientists prevents us from fully recognizing its potential. Interdisciplinary efforts have many advantages; however, art isn’t just a translator or a lense through which to view science. Artists bring something new to our understanding of the world. They raise new questions and look at things in a way we otherwise wouldn’t think of. For proof, just look to Dr. Jevbratt. While discussing the process of making rope, she references the knowledge that can only be truly gained through artistic endeavors. “That’s the kind of knowledge that one has to keep fighting for, to say ‘This is also knowledge,” she says, “it’s different than a scientific approach of exploring the world.’”

Recently, after having established a career, she feels that she has the luxury of exploration in her art mediums. It’s always been about finding ways to rework the way that she and other people see the world, whether through software or yarn. Dr. Jevbratt took a different approach on the animal vision track. She decided to explore the side of human-animal understanding that most scientific endeavors shunned: the realm of telepathic animal communication.

Dr. Jevbratt  has traveled to talk to people from different cultures about what it was like to bridge the gap between being human and ‘becoming (a non-human) animal’, which some do through dance or other rituals. However, she admits, because she’s not an anthropologist, she often felt clumsy talking to these people.

Dr. Jevbratt felt the scientific approach was limited, so she reached out to a human-animal communicator that she’d met in Santa Barbara. During their meetings, Dr. Jevbratt shared that she “would show her different things and she would try to communicate with animals and they would show her what they saw.” Dr. Jevbratt made a web interface that they used to compare the two perceptions, coming up with color pairs. They eventually got enough data about one of the subjects, a cat, to use it in an algorithm. They found that the results were very similar to the scientific discoveries about the way that animals saw.  “It was never my point to prove that,” she said, referring to the similarities between the scientific and the animal communication approaches, “but I decided to be open minded. I really want that to be part of the app [her animal vision app] . It questions science in an interesting way which I like to do as well, even though I think they’re both interesting approaches.”

This idea of understanding the world around her through methods other than scientific ones is central to all of her work. Her interest in rope and hand-crafted materials, for example, is a basis for most of her projects. One of these brought her out to Santa Cruz island, where she collected invasive species—plants and insects—and refined them into dyes. Using each dye to color a different bundle of homespun wool yarn, Dr. Jevbratt plans to map out the Channel Islands using the colors of their respective invasive species, weaving the wool into scarves. Through her research on animal vision, Dr. Jevbratt has noticed that the yarn’s colors all fall within the animals’ sensitivity zone of their color vision.

Her newest project has been to use fishing net knots to make a web representing the genetic network that connects her to a woman on death row—a political statement in a physical and artistic form. Each method helps us better understand a different aspect of reality that the others might not have revealed. “Taking net art to actually making nets,” she laughs, “kind of backwards.”

She also shares her passion for spinning, telling me that “the knowledge that’s embedded throughout tens of thousands of years in that movement, just this spinning movement,” she says, “That is such an important aspect of humanity. There is some type of knowledge in it that can only be described and only be investigated by actually doing it.”

Her continued efforts to examine reality sometimes challenge the primacy of scientific methods. Some may assume that she is an opponent of science, when in reality she sees science as just one of the many methods of understanding the world. “Whatever way we can, I want to figure out what’s there.” She looks to science with the same fondness and curiosity with which she sees her yarn or photographs. “Do I need to defend science at this point?” she asks, referencing the building tension around defunding science programs and invalidating scientific discoveries, “Because I don’t want everything to be completely relative, but on the other hand, I’m also really interested in looking at these other ways of looking at things.” Her point is the system isn’t a binary one: it is not science OR art. To make progress, we need to recognize both scientific and non-scientific methods as ones capable of contributing to new ways of understanding. 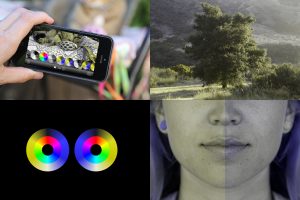