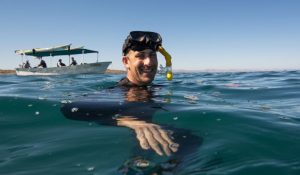 Greenwashing. Corporate Social Responsibility. Tree Huggers. Sellouts. Reconciling environmental concerns with economic progress has been a subject of long-standing debate. Too often we see environmental sustainability as diametrically opposed to economic growth, in large part due to the pursuit of  of economic growth at any cost. Historically, environmentalists had to fight legal and political battles against business-focused individuals, waging wars that have polarized these interests groups to this day. Dr. Christopher Costello, a professor at UC Santa Barbara’s Bren School of Environmental Science & Management, however, claims that a middle ground is not only possible, but practical, and in many ways, ideal.

Dr. Costello and his fellow researchers at Environmental Market Solutions Lab have pegged economic values to things most of us wouldn’t consider economic — like adaptation to climate change, and the impact of information on business management decision-making processes. For example, how can businesses adapt to climate change without their profits crashing? Or, how would people or businesses behave or operate differently if they knew more about the future of climate change?

Many of these questions revolve around the ‘value of adaptation’ to climate change, which heavily informed Dr. Costello’s research on managing natural resources such as fisheries and forests. For example, without any knowledge of climate predictions, the timber industry’s profits would take a hit when their cold-weather trees withered in the face of rising temperatures. Perhaps tree growers could slowly transition, growing more warm-weather trees each year while phasing out those less accustomed to predicted temperatures. According to Costello’s research, this type of adaptation is the best way to go, and can yield large benefits. “We find on the intensive margin, changing the rotation intervals will yield a low value of adaptation,”  he writes in the abstract for his Timber study, “but on the extensive margin, replanting more suitable tree species can yield significant value.” Let’s translate that.

The intensive margin is all about how

the resource is managed, like how many hours a worker puts into a job. Costello’s research applies this to crop rotation and forestry. A key decision for forest managers is how long to let the trees grow before they are harvested for timber or other products.  The key point is that climate change will alter this optimal “rotation time”. But, the study found that this kind of intensive adaptation does not yield much value to California’s timber growers. He saw better results on the

margin, which refers to whether a resource is utilized (how many trees of a certain species are planted, if any.) In basic terms, what Costello tested here was: if farmers simply plant different trees that are better adapted, will this save money and bring in profits? And according to the results, yes---there is significant adaptation value to this practice.

Adaptation, though, is only half of the story. Costello recognizes that adaptation is in no way the end-all-be-all of the climate change struggle. “You can’t adapt your way out of it,” he adds, “and of course it’s much worse in many parts of the world than it is here.” For this reason, a significant portion of his work also focuses on mitigation. All of this research is part of the Environmental Market Solutions Lab (EMLab): a growing group of researchers whose primary goal is to “think about ways to design market-based interventions that respect environmental justice and equity.” Meeting environmental, social, and economic needs all at once is an ambitious goal. In fact, all of their work revolves around a central question: Can you preserve the environment and also preserve equity and justice with a market-based plan? Yes, but only if you navigate the fair distribution of property rights.

Past market-based environmental solutions have often failed to address the equitable distribution of property rights. “It’s a buzzword,” Dr. Costello says, perhaps because for a lot of people the term implies some kind of exclusive system, or, as he puts it, “some elite group of people are going to have the rights and everyone else is hung out to dry.” Not him, though. He’s adamant about the fact that elite holdership isn’t the proper definition of property rights. Instead, these rights simply determine who has the right and responsibility to something---whether it be land, water, or air. “If you don’t have property rights at all...well, we’ve run that experiment all over the world for many resources and it doesn’t work.”

How do property rights factor into taking care of natural resources? “We have, somehow in society, decided that the polluters usually get the initial rights,” Costello says, but “why shouldn’t the person who has to breathe the air get the right to clean air?” This issue of property rights relates to the tragedy of the commons: a situation in which individuals exploit common resources. In this situation, each person will take more than their share of the common resource because they are constantly competing with others. Dr. Costello tackles this kind of exploitation in his research of fisheries using ‘catch shares.’ So far, they’ve worked: “Implementation of catch shares halts, and even reverses, the global trend toward widespread collapse,” “Catch shares are referred to as Individual Transferable Quotas in his study (ITQs)”---this concept might sound like cap and trade, because it

essentially the same idea. There was a strong correlation between the implementation of ITQs and the improvement in fisheries.

The lines represent the % of fisheries that have collapsed with (the dotted line) and without (the solid line) using ITQ fishery management.

Whether a fishery will successfully manage risk depends on its status. All global fisheries can be divided into two categories: those which are well managed, and those which are open access. Well managed fisheries have some kind of management authority setting a standard for allowable catch, so fishery managers are taking account of inherent biological risk as they make regulation decisions. These regulations could be formal or informal---Costello’s research has shown that regulations in a variety of forms can fulfill the purpose of managing consumption and avoiding over-exploitation.

Open access fisheries, on the other hand, are free for all, without any kind of management organizing or regulating the commons. Several countries in Asia and Africa have this system, and the way they go about fishing is predictably very different from more meticulously managed areas. “Let’s say, for example,” Dr. Costello continues, “at an open access fishery in Thailand, people are just out there trying to feed their families, so they’re responding to risk in an entirely different way.” People in open access fisheries aren’t necessarily thinking about the long term because there is no set of incentives to do so.  If they don’t catch the fish now, someone else will, and they will not be there in the future. Without officially regulated priorities, they resort to their own priorities, which happen to be feeding their families. People in these environments are much more likely to exploit the resources. “What that says to me,” Dr. Costello adds, “is that the way people respond to risk depends greatly on the institutions they’re operating from within.”

There are many ways to make more formal rules consistent with traditional rules. While there are different aspects to every community, there are basic undercurrents that connect them, making incorporating cultural diversity and traditional knowledge into formal regulatory management institutions possible. “Using science to inform management is immensely more complicated if you take the view that every place is unique and must be treated as unique,” Dr. Costello says. If you take the stance that every place must be different, then you’re assuming that you can’t take something that you learned from one place and apply it to another. This kind of flexibility is essential to progress, and essential to any successful market-based environmental legislation.

Dr. Costello and his fellow researchers help develop these carefully crafted solutions to governments and small communities alike. Kelsey Jack, who leads their poverty alleviation group, works with a variety of stakeholders in Africa and elsewhere. For example, she recently led an experiment with a village where she trie to understand the incentives, and get people to adopt better practices...What kind of incentive would get a farmer to plant a tree and then care for it over its lifetime?” eMLab’s work varies in scope as well. Dr, Kyle Meng co-leads the climate group at eMLab, and is researching how climate change will affect global food trade.

All of eMLab’s research focuses on community involvement in management decisions, because as Dr. Costello has found, pure regulation often doesn’t work. Just telling people what to do doesn’t work, because although it might solve the environmental problem, it provides no incentive for innovation. There’s no room for independent thought. Taking care to include this kind of flexibility in environmental legislation is absolutely necessary, and it’s done through a careful, equitable distribution of property rights. And that’s Dr. Costello’s inspiration, and EMLab’s goal in a nutshell, whether it be on timber, oceans, or in a village: using property rights to enable innovation while meeting environmental goals in an equitable way.