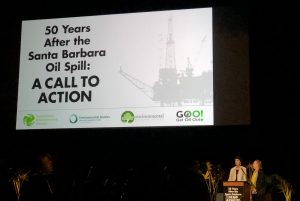 The 1969 Santa Barbara Oil Spill has been the topic of conversation for the last month. Over 50 years ago, on January 28, 1969, an oil spill dumped

On Sunday, January 27, I went to an event at Arlington Theatre to commemorate the 50th anniversary of what is now known as the dawn of the modern environmental movement. Throughout the day, I found myself time and time again being filled with a surge of emotion and excitement. I would like to tell you about my experience at the event and how it introduced me to a wealth of perspectives about the environmental movement in Santa Barbara.

Approaching the theatre, there was an audible buzz of activity, but I was not sure exactly what to expect. As I turned the corner into the foyer, I was shocked to see the large entryway full of people. Organizations were set up at tables as far as the eye could see, with representatives educating attendees on how their organizations fight climate change. The energy in the theatre was palpable, with people of all ages excited and motivated to take action on combating climate change.

Once the event was set to begin, I found my seat. The first speakers were Congressman Salud Carbajal and State Senator Hannah-Beth Jackson. Congressman Carbajal emphasized that the new House of Representatives will aggressively recommit time and energy to securing a healthy and safe future. Senator Jackson’s passion and strength was obvious as she stepped up to the mic, expressing the need to take back our community, our state, and our country for future generations. She said a couple of phrases that really stuck with me. One was “If you don’t drill, you can’t spill,” which I had never heard before. That is a beautiful mantra, especially given the current state of offshore oil retrieval off the Santa Barbara coast. The second was “We borrow the Earth from our children; we do not inherit it from our ancestors.” I, and probably many others, think of this Earth as mine to explore and enjoy. But Senator Jackson’s words left me thinking about how we are leaving the Earth for future generations. The idea of a borrowed Earth is a powerful image that I believe could help shift the way people think and care for our planet.

Michael Brune, the executive director of the Sierra Club, spoke next. He stressed the importance of protecting our remaining wild lands while transitioning to 100% renewables. He acknowledged how easy it is to get depressed about the latest scientific findings regarding climate change, but also talked about how there are so many reasons to be hopeful. Activists across the globe are fighting for just environmental policy to mitigate the worst effects of climate change, and many countries’ legislatures have passed sweeping laws to minimize waste and emissions. He highlighted the strength of collective people power, which leads to the combined energy, passion and skill of many people coming together to divest from and stop continued exploration and use of all fossil fuels and make companies and government officials accountable to us.

Soon after, David Pellow, the chair of the environmental studies program at UC Santa Barbara, spoke. He discussed the many initiatives that UC Santa Barbara had taken on, whether that be integrating environmental justice into school systems, beating down the proposal for the Puente power plant, or actively opposing Cat Canyon oil expansion. He ended by stating that “in order to have an ecologically sustainable and democratic future, we have to be in this fight to win it because our very survival depends on it.”

At this point in the event, I already felt excited and ready to act on the issues of climate change and environmental justice, but as Rose Strauss approached the podium, I found an even greater surge to act. She is someone I had the privilege of working with at UC Santa Barbara’s Research Experience and Education Facility, and seeing a familiar face was humbling and empowering considering she is my age and such an incredible activist. Rose had a lot of insightful comments, including “This is the fight of our lives and for our lives; We have no time to lose,” and “Silence in the face of injustice is inexcusable.” Such eloquent and articulate words coming from a student my age, speaking in front of hundreds of people was incredible to witness. She was a confident, powerful speaker who captured the audience’s attention with her passion and motivation. Her call to action was to support the Green New Deal. Maybe it is my young naivete thinking radical action can be taken, but I do strongly believe that with enough action from the people, we can accomplish more than could even be imagined.

Annie Leonard spoke last. Not only is she the creator of the Story of Stuff,

a project working to build a more healthy and just planet

, but she is also the executive director of Greenpeace USA. Her talk centered around three numbers: 50, 11, and zero. 50 symbolized fifty years after the Unocal Oil Spill. 11 represents the 11 years we have left to avoid the worst effects of climate change. To be able to do that, we would have to reduce fossil fuels by 50% by 2030 and 100% by 2050. Zero references the number of new fossil fuel projects the world can sustain. The questions are no longer about the science; the questions are about how catastrophic the consequences will be. She also pointed out that most people in the U.S. want rapid change in climate policy, so we must leverage that support and turn it into mass action because everything we love is at stake.

Above all, I left the event feeling incredibly empowered to take action on climate change and proud to be an environmental science major at UC Santa Barbara. Being surrounded by hundreds of people who wanted more than anything  to see rapid change was inspiring and gave me so many reasons to be hopeful. It is easy to give up the fight given all of the obstacles in the way, but I implore you to keep fighting however you can. Our futures are at stake, and we need to do everything in our power to ensure we can survive and thrive on this beautiful planet. As the Carbon Neutrality Initiative Ambassador at UC Santa Barbara, I am ready to mobilize the energy that I felt at the event to engage students and increase active participation in UC Santa Barbara’s sustainability measures.