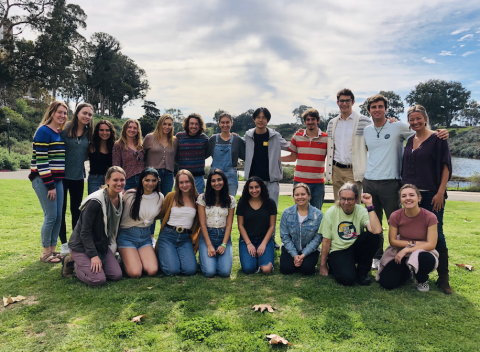 The opportunity to be a “Cool Block Intern” was forwarded to my inbox at the start of this year, my senior year at UC Santa Barbara. The role entailed designing and implementing a community-based carbon-reduction initiative anchored in the overarching goals of a carbon-neutral by 2025 (UC system goal), Isla Vista by 2025 (our goal), and ultimately a carbon-neutral California by 2045 (state goal).

The idea captivated me from the start. For one, I saw the Cool Block program as an accessible, step-by-step guide for reducing carbon emissions at the personal and household level. The program has been implemented in over 200 cities across the world and encourages participants to adopt a low-carbon lifestyle. I was intrigued by how the Cool Block program takes a bottom-up approach, bringing the power to make change to the household level. I also love the idea of Isla Vista becoming one of the first carbon-neutral communities in the world. The one-square-mile beachside oasis on Chumash land is an otherworldly place to call home. The scene of majestic wetland birds and eucalyptus on the bluffs, with the distant peaks of the Los Padres National Forest in the background, often feel like a break from reality. This oasis in the midst of one of the top public universities in the world, and in the birthplace of the modern environmental movement, is the ideal incubator location for carbon-neutral living.

For a deeper explanation of what Cool Block is and what the program means for Isla Vista, make sure to check out Part 1: Where Did This Idea Come From?

The goal of the Cool Block program in Isla Vista is to enact a carbon-neutral Isla Vista (CNIV) by 2025. “Cool” refers to the actual lowering of carbon footprints, with the goal for households in Isla Vista to reduce their carbon footprint by an average of 25% or 11,000 pounds of carbon. “Block” refers to the organizing unit, the physical block that you live on. The program entails eight bi-weekly meetings led by different neighbors on the block and covers five major topics: disaster resiliency, water stewardship, carbon reduction, neighborhood livability, and empowering others.

Households are provided with a web platform to create an action plan and track their progress in each topic and the overall program. There are 118 actions that participants can choose from, some of which is done at the individual level, while others are as a collective. Local government and nonprofit resources are integrated into each action to amplify their impact. It took me a long time to grasp all of the moving parts of CNIV by 2025, so if you’re confused right now, so was I.

To avoid getting caught up in all the reasons why reaching a carbon-neutral Isla Vista with the Cool Block program would not work, I found inspiration in the reasons that it could. I broke down my base motivation for why I wanted to be a part of this, which stemmed from the positive impact that I hope to make in my community and in the world. I want to help my generation feel like they have the power and the information to address climate change and to take action on behalf of generations to come. And if enough residents in Isla Vista went through the Cool Block carbon reduction program, we would rapidly decrease our carbon footprint. As a community that likes to compete for who can compost the most, show off their pet plants, wear thrifty attire, and avoid taking a car around, we could make this happen. So I decided to try it out.

Throughout Fall Quarter we held information sessions, gave presentations, and engaged with community leaders in order to recruit “Block Leaders” to pilot the program in February. Those who were interested in becoming Block Leaders attended a half-day long training to prepare for recruiting their neighbors for the 4.5-month program.

Nearly 20 UCSB students from all grades and a variety of majors trained to become Block Leaders. All were united in helping Isla Vista become a resilient community, getting to know one another, and envisioning carbon neutrality in the next five years.

I started to understand the magnitude of the positive impact the Cool Block program in Isla Vista could have. At one point, we held a community meeting where people came from all over Santa Barbara County to hear more about the CNIV movement and Cool Block’s role in it. Hearing the opinions on the program from community actors at large, was a next-level experience. They all showed up willing and ready to contribute innovative ideas, resources, and connect the dots while never losing sight of the bigger picture.  For the Block Leaders, our neighbor recruitment efforts did not go as planned and the COVID-19 pandemic transformed the way we could interact with one another. We pulled together as a group and created a virtual block that meets over Zoom to engage in R&D sessions committed to developing realistic and inviting models of engagement for our community. Meeting with this group of Block Leaders has been a major highlight of my entire experience as a UC Santa Barbara student. We have a lot of fun laughing over our various shelter-in-place situations, sharing fears, or random silver linings, and bonding over our shared home in Isla Vista. The social aspect of our group has been deeply empowering in a time where it is difficult to feel connected and hopeful.

My experience as a Cool Block leader has been far from what I expected when originally applying for the position. Although we were unable to physically mobilize as neighbors on the block, we have found unique power in building relationships while remote and creatively building out an exciting plan for the future.

There is an amazing community continuing to be built around the vision of a Carbon Neutral Isla Vista by 2025. Throughout this year, CNIV has allowed me to understand the IV community better than I could have ever imagined. I worked with many like-minded individuals, inspiring community members, and even Chancellor Yang.

The problem of climate change cannot be solved. The only promising way to address it is through a combination of problem solving and cultural development to achieve a collective shift in mindset. How our earth’s ecosystems will function from this point forward depends on the bearing of responsibility and adaptive self-management of humanity. Communities must develop abilities of response, and the Cool Block program in Isla Vista is a vehicle for doing so.

If you want to get involved in a Carbon Neutral Isla Vista by 2025, email Robin Elander at robin@globalgoodimpact.com for more information.