Transportation Alternatives Program: A Smooth and Relaxing Ride to Work 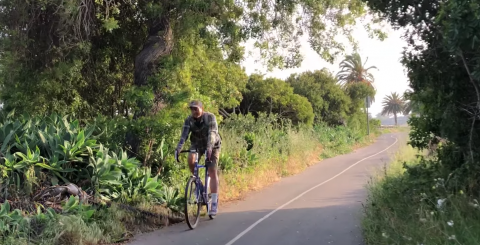 Want a cost-effective, more relaxing, safe, and environmentally-responsible ride to work? UC Santa Barbara staff, faculty, and students are ditching their single-occupancy vehicles and using alternative forms of transportation to make their daily commutes to campus.

The Transportation Alternatives Program (TAP) works to ease commute times, traffic congestion, and demand for on-campus parking. The program’s efforts are also focused on reducing greenhouse gas emissions and contributing to an overall more sustainable campus. Additionally, UC Santa Barbara students, faculty, and staff are eligible for the program and can receive benefits such as on-campus quarterly complimentary parking perks, pretax payroll deduction for vanpool and bus passes for faculty and staff that saves the federal and state income tax and FICA on the fares, and access to an Emergency Ride Home Program.

You are eligible to join TAP if you are UCSB faculty, staff or student and primarily commute by foot, skateboard, bicycle, bus, carpool, vanpool or train between your residence and the UCSB campus.   Graduates who are UCSB-employed less than 45% and all undergraduates must live at least 2-miles from campus to qualify for TAP parking perks.

UCSB students, faculty and staff from near and far, are greening their ride through the many easily-accessible forms of alternative transportation. The Santa Barbara Metropolitan Transit District (MTD) buses are a fantastic option for those commuting from anywhere in their service area from Goleta to Carpinteria. Google Transit shows routes and you may select your desired departure or arrival time from your residence or UC Santa Barbara.  30-day unlimited-use bus passes are only $31 pre-tax per month.

For residents commuting from Northern Santa Barbara County, the Clean Air Express bus operates buses running from Buellton, Santa Ynez, Lompoc, Santa Maria, and Solvang. The Coastal Express bus is optimal for commuters coming from Ventura or Oxnard. Staff and Faculty are eligible for a pre-tax deducted bus pass taken automatically out of their paycheck. The Clean Air and Coastal buses have Wi-Fi, so commuters are able to get work done or just relax during the bus ride.

The Amtrak Surfliner Train is also a viable option for those who are interested in commuting by rail between Ventura County or Carpinteria and UCSB.  UC Santa Barbara Physics Professor, Omer Blaes, commutes to campus by train. “While the train generally takes a bit longer, it is time that can be spent usefully. Instead of being behind the wheel feeling frustrated about the traffic, I am sitting comfortably, with no distractions, able to access the internet and work through the train’s wifi, or even just read a book for pleasure. Heck, I can even get a cup of coffee from the cafe or use the bathroom if I need to,” said Blaes.

If buses and trains are not your preference, TAP offers other modes of transportation. TAP’s Vanpool and Carpool programs offer a cost-effective and relaxing way to get to campus, especially for those who have to commute long distances or have limited access to public transport. Carpoolers who travel in a vehicle with two or more UC Santa Barbara graduate students or staff who are 45% or more UCSB employed or faculty members are eligible for a half-priced carpool discount parking permit ($225 vs $450 per year).

The Vanpool Program is accessible to commuters from Santa Maria, Buellton, Santa Ynez, Solvang, Lompoc, and Ventura. Riders can have a relaxing commute, save money, and contribute to a livable environment by reducing emissions.

Live locally and interested in getting some exercise, saving money, and reducing emissions? Join Santa Barbara’s vast bicycle community of over 10,000 students, faculty, and staff! Santa Barbara and Goleta have a number of safe and accessible bicycle routes to campus. Free bicycle maps of Santa Barbara County can be accessed online or you can use the bicycle layer of google maps online or the google maps smartphone app, so you can plan your route. Getting around campus is even easier; UC Santa Barbara was recently recognized by the League of American Bicyclists as a Platinum-level Bike Friendly University, recognized for its widespread bike community, HOPR bicycle-share program, and an extensive network of bicycle paths, bicycle roundabouts, and bicycle underpasses and bicycle parking including bicycle lockers and showers.

For those who leave their car at home and still may have an occasional need for wheels during the week, there are Zipcar carshare vehicles available on-campus and in Isla Vista. Zipcar rental includes fuel and insurance. Zipcar membership fees are waived for all UCSB Faculty and Staff and TAP members.

There are numerous reasons to leave your single-occupancy vehicle parked at home and join the Transportation Alternatives Program. Want to hear from current students, staff, and faculty apart of the TAP Program? Check out these three videos created by one of our UCSB Sustainability interns that highlight the myriad benefits of ‘greening your ride’.