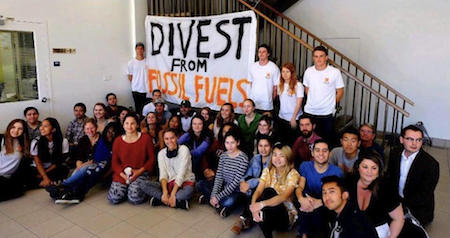 In mid-September, a short opinion piece in the Los Angeles Times announced a shift that has for years felt both just around the corner and impossibly far off-- the UC system is divesting from fossil fuels. The article specifically promotes the financial risk of fossil fuel investments over the ethical mandate encouraged by many climate activists but also points out that the result is the same no matter the rationale.

Others have written much more eloquently and thoroughly than I can on the broader energy and impact of the student divestment movement. UCSB graduate students and movement leaders Emily Williams and Theo LeQuesne describe how this divestment sends a strong signal to other universities, financial institutions, and the world that the age of fossil fuels is at an end. They challenge the idea that divestment can be viewed exclusively from a financial lens in a world on the brink of a complete climate disaster and correctly point out that if maximizing investment returns were the only criteria for investing the UCs should have divested years ago. Given that the need for divestment has been so well documented elsewhere, I’d like to reflect on what this recent success means for me and the countless others who have been involved in the movement over the years.

I was brought in to the divestment effort in late 2011 when the campaign was first forming. As a Graduate student, I was recruited by the California Student Sustainability Coalition, I drafted a report on the UC’s investment portfolio and did my best to determine exactly how much of it might be invested in fossil fuels. I remember this time as being especially formative in my eventual career in student organizing; it was through this project that I submitted my first California Public Records Act, for example, and the first time I remember networking with students from multiple campuses on the same larger advocacy goal. I learned about investing and just how complicated a multi-billion dollar endowment of pooled funds could be. For those of us who had grown up learning to recycle and to always turn off the lights, this was a new type of movement that drew a line between capital and climate change and sought to break that connection.

In 2012 I became a full-time employee at UCSB. While I drifted away from direct participation in the divestment movement, I continued to work with students who were very deeply involved. In 2013, the UCSB AS Environmental Affairs Board (EAB) endorsed and the AS Senate approved a resolution urging the UC Regents to divest from fossil fuels, and the UCSB Academic Senate quickly followed. Students testified to the Regents and were frustrated by the continued lack of action, but each incoming class continued the effort.

In 2015, divestment activists won a partial victory when the University announced that it was divesting from coal and tar sands and published its Framework for Responsible Investing. While this was clearly a sign of progress, full and permanent divestment was still the goal. By this point, I had become the staff advisor to EAB, and several EAB students were still actively campaigning through dedicated divestment organization, Fossil Free UCSB. They continued to write letters, send pictures, attend meetings, and gather support for their campaign, but progress felt like it was stalling out.

Frustrated and feeling as though they had exhausted all official channels, Fossil Free UCSB finally staged a sit-in in the lobby of UCSB’s main administration building Cheadle Hall in the spring of 2017. EAB officer and Fossil Free member Jem Unger Hicks described this phase of the campaign: “Working on the Fossil Free campaign was never easy or worry-free, but it was ultimately one of the most rewarding experiences I’ve ever had. There were times when it felt like we were hitting brick wall after brick wall and it seemed like we would never convince the Regents to budge on divestment. I would remind myself that even if we didn’t get an agreement to divest this year or the next year or even before I graduated at all, we were setting up the groundwork for future students to continue the fight.”

Jem’s words demonstrate a perspective that I think was so critical to the success of this effort. She and so many students like her were discouraged but were prepared for a movement that could go on for several more years. The sit-in showed UCSB and the UC system as a whole that divestment as an issue would not fade away and could not be ignored. As Jem describes it, “that week that we sat in the administration building lobby was really rough, but the level of attention that we garnered that resulted in the landmark endorsement from Chancellor Yang followed by a handful of other UC Chancellors made it worthwhile.”

The students felt that the endorsement from multiple Chancellors across the UC system would surely sway the Regents towards divestment, but very little ultimately changed. Fossil Free students at UCSB reported feeling lost, particularly as those who led the sit-in and other major initiatives began to graduate, but still did not give up. Eventually, during the spring and summer of 2019, the UC Academic Senate approved a Memorial “to divest the University’s endowment portfolio of all investments in the 200 publicly traded fossil fuel companies with the largest carbon reserves”. Two months later, Jagdeep Singh Bachher, the University of California’s Chief Investment Officer and Treasurer, and Richard Sherman, Chairman of the UC Board of Regents’ Investments Committee published the Los Angeles Times piece announcing that the UCs were divesting from fossil fuels.

The campaign for fossil fuel divestment was long and progress was slow. Today, some in the campaign remain wary of the recent public announcement both because it did not acknowledge the years of activist effort and because it stated divestment was only for financial reasons; they fear the latter leaves an option for re-investment that did not exist following previous divestments from tobacco or apartheid regimes. Personally, I am a bit more optimistic. While it is certainly true that fossil fuel divestment was not structured in a way that guarantees its permanence or recognizes a moral necessity, the strength and duration of the campaign means there is now seven years’ worth of students and alumni who have been engaged, trained and empowered in climate activism. Divestment has taught all of us that fights that seem impossible can be won, and we’re ready for the next step.