Our Origins of Environmentalism

The persistence of California’s grueling drought has forced a serious conversation among politicians, farmers, and citizens in charting a course for action. Mandatory water restrictions ordered by Governor Brown are not only unprecedented, but also illustrate a growing consciousness that is taking a hard look at how the state will move on in the future. In some ways, the dialogue in California mirrors the environmental situation on a global scale.

It is clear that climate change is occurring, and many lifestyles adopted by developed countries around the world are becoming unsustainable. Despite the traditionally bleak outlook of the future, some believe that environmental awareness in this day and age is more pervasive and universal than it has ever been before. The question then becomes: how do we translate people’s knowledge, attitudes, and beliefs about the environment into real behavior change that could begin to impact their carbon footprint?

The field of environmental psychology looks to answer these questions. Social psychologists such as Cameron Brick, PhD candidate at UCSB, study individual differences and social influence to help explain environmental actions. For example, his recent paper in Environment and Behavior ‘Unearthing the “Green” Personality’ identifies the core traits of personality that influence environmental behaviors and shows how personality is translated into action through attitudes. 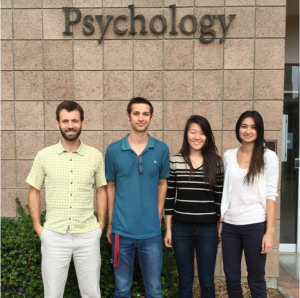 “People who are open-minded and enjoy new experiences,” Brick said, “have the kind of flexible, long-distance and long-term thinking to become concerned and start changing their behavior. These people are in turn more concerned about the environment and more likely to choose pro-environmental actions in their daily lives.”

Personality, as Brick describes, does not tightly determine environmental behaviors, but instead acts as a new and unique predictor. Genes, life experiences, and culture are all variables that act as the building blocks of an individual’s personality, and contribute to their development of regular behaviors.

Brick’s data continues to challenge preconceived notions of what type of individual is most likely to exhibit environmentally conscious actions. A common belief is that as people become more educated, they become more knowledgeable, and in turn, environmentally-friendly. The sequence of events, however, is more complicated than that. “We think of educated, high-income people as being more environmental, and they are sometimes more concerned,” Brick said. “But since they have high incomes they actually do more damage than someone who is lower-income, consuming less, and traveling less.”

This underscores the idea that concerned attitudes about the environment don’t necessarily lead to productive behaviors. An environmentally-conscious individual may own a fuel-efficient car, but maintain a green lawn in semi-arid Southern California and travel by plane. On the other hand, someone may not particularly care about the environment, but display a more green behavior profile by not flying for instance, Brick says.

It is important, Brick believes, to dispel the notion that environmentalism is associated with austerity.

There is a preconceived idea that “environmentalism is necessary, it’s moral but it just means we get less of the fun stuff,” Brick said. “I think that is not true and it’s a dangerous message to give out.”

A question that has long been posed by environmentalists, and is especially relevant to California right now, is whether the growing severity of climate-related issues is going to force change in the way that people live their lives with regard to the environment.

The hurdle to lifestyle and behavioral change is a difficult one to cross and Brick believes that just giving people information is not effective at creating behavior change. First, people need the knowledge, but they also need accessibility to options that give them the ability to change their behaviors. These are called “channel factors” and could range from environmental policy initiatives to a convenient public transportation system. Channel factors act to encourage people to change their habits while still preserving the resources in their community that allow them to maintain the same lifestyle. Environmentalists may press for people to give up their cars, but unless there exists a convenient, low-cost, public transit option for them, they won’t be able to do anything else but drive, Brick says.

Even when armed with facts and knowledge, Brick asserts that people are not equations of maximal interest who plug in new values and generate a new cost-benefit solution. Minds work in complex ways that take social relationships, social identity, and behavioral contexts into account. In many cases, the immediacy of dangers and threats unrelated to the environment play a role in the adoption of environmental behaviors.

“Compare it to terrorism, where there is a bad guy doing an immoral thing to you, it could happen today, and the consequences would affect you immediately. Instead I’m telling you that if you drive tomorrow, an act that doesn’t seem to harm anyone, it will relate somehow to sea level rise in Florida someday for someone else’s children,” Brick said. “It’s entirely true, but it doesn’t compel our stone-age brains in the same way that a much smaller threat like terrorism does.”

Many of the fundamental questions related to the environment have been sufficiently answered. We know the answers to questions such as: “what’s going on in the environment?” and “what do we need to do differently?” Environmentalism is a convergence of a variety of disciplines and fields of study ranging from physical sciences to biology to the humanities. Many have solved the problem of what we need to do, but it’s the work of Brick and other psychologists that seeks to understand why people do things, and how we can foster change to make them do things better.