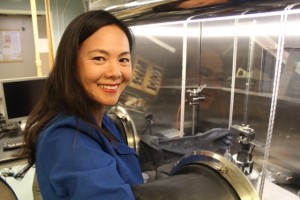 Through a series of scientific breakthroughs in the past decade, the application of solar cell technology could soon become more versatile than ever before. In the solar energy industry, organic solar cells, also known as plastic solar cells, have the potential to be groundbreaking for the future of renewable energy due to their light-weight, low-cost, and flexibility.

The manufacturing of organic solar cells reaps the benefit of being not only low-cost due to their solution process, but also low-environmental impact in that they can be mass produced with abundant carbon-based material. These cells can be constructed at room-temperature without the need of a costly and energy-intensive cleanroom as in the case of silicon solar cell production. The organic solar cell is a radical departure from traditional inorganic silicon solar cells, which are heavy and cumbersome. In person, the appearance of an organic solar cell resembles a laminated sheet of paper.  It can be fabricated using methods associated with traditional printing such as spray printing, ink-jetting, or roll-to-roll coating. Other forms of printing such as blade coating, are utilized in the laboratory process of fabrication. It is flexible and polished, but unlike any other material of its kind, it features a microscopic nanotechnology capable of capturing sunlight and converting it into electricity. 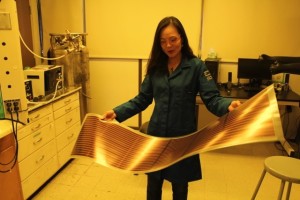 Researchers around the world havebeen working on developing organic solar cells, and a notable group spearheading the efforts has been none other than Thuc-Quyen Nguyen’s research group at UC Santa Barbara.

“I can bend it or roll it up,” Nguyen demonstrated in her laboratory. “I can put it on the floor and step on it with my high-heels and it is still functional.”

Organic solar cells can be produced as different colors (red, blue, and green); therefore, they can be easily incorporated into buildings as semi-transparent window, building coats, and glass door screens. The installation cost is expected to be low due to their light-weight. This illustrates the versatility that allows the cells to adapt to a variety of surfaces and applications. Its flexibility also allows it to be shaped into something as novel as a solar tent.

For now, the limitation preventing the cells from making a splash in the solar energy market is their low efficiency and lifetime. While multijunction solar cells used in space run at around 40% efficiency and commercial silicon solar cells around 15%, organic solar module’s efficiency hovers around 7%.

Still, Dr. Nguyen believes that there is a place in the future of solar for organic solar cells due to their wide array of potential uses. “There is no holy grail or simple solution. It depends on the type of application,” she said. “Scientists explore different types of technology and we can see that some technologies work better than others depending on the application.”

Organic solar cells have traditionally been made using polymers, but that can pose difficulties because it is difficult to make exactly the same polymer each time (named batch-to-batch variation). The chemical structure is the same, but the polymer chain has different length and within the same batch, there is a distribution of polymer chain length. Although conducting polymers offer an attractive solution process for solar cells, their long polymer chains often present problems with weight distribution and reproducibility.

“Conducting polymers,” as Nguyen told us. “Becomes a problem when you need to transport charges or electrons. Different molecular weight leads to different film morphologies and conductivity.” This has led her group to take polymer organic solar cells in a completely new direction through the design and application of solution-processed small-molecule (finite molecular weight) technology. Incorporating small-molecule in solar cell technology allows for reproducible results. Nguyen initially tried to convince her synthetic colleagues to build small molecules but was met with disinterest. Thus, Nguyen, a physical chemist, decided to hire a synthetic postdoc scholar to pursue her idea.

“We combined the best of both worlds. We made small molecules that also go to solution so that we still can use solution process but overcome the problem with material reproducibility,” Nguyen said. Her group published their findings in 2008 and within a short period of time, “at least fifty research groups around the world began using our approach including colleagues at UCSB,” she said.

Nguyen and her group members study characterizations of the organic solar cells that require an understanding of the relationship between chemical structures, processing, properties of the solar cell, and how those factors contribute to its performance. Typically, bulk device efficiency is measured through illumination and extraction of the current generated by the device. In organic solar cells, nanoscale morphology is extremely important to generate and transport charges. From bulk device study, it is difficult to understand why a device works or doesn’t work. To combat this, Nguyen spent her first few years at UCSB developing a method to probe this nanoscale morphology by using atomically-sharp probes that scan the device on the nanoscale to map out topographic features of the surface and current generation. Information obtained by this method helps explain how a device works or does not works. Besides this nanoscale characterization method, her group also uses several other methods available through shared facilities at UCSB and national laboratories.

A productive collaboration with other faculty at the university gave Nguyen’s group the freedom to do exactly that. “We collaborated with Guillermo Bazan, a synthetic chemist, to design and make materials. We no longer had to make our own materials.” Her lab could now focus on studying the organic solar cells’ nanoscale, bulk characterization, and device physics. “In terms of device engineering, we collaborated with Alan Heeger whose group is very good at engineering the different architectures of the device.”

“That’s the great thing about UCSB,” Nguyen said. “I like the collaborative environment. This is a very unique place that you don’t see in other places in the world.”

Nguyen’s postdoc scholar (Dr. Arnold Tamayo)–who started the synthetic project in her group, and two of her PhD students (Dr. Andres Garcia and Dr. Corey Hoven) have developed a local solar company named Next Energy Technologies, based on the technologies in her laboratory.