California is four years into one of the worst droughts on record. Precipitation levels over three-year water periods show that California as an entirety is effected, a notable feature of this particular drought. Los Angeles recently received only 11.93 inches of rain, 17.93 inches below normal for a three-year snapshot, and in typically wet San Francisco, not a drop of rain fell in the downtown area in January 2015, the first time since records began in 1850. Our snowpack levels are at an all time low, and when Gov. Jerry Brown famously imposed mandatory restrictions for water use on April 1, 2015, California’s snowpack was only five percent of the average for that date. While rainfall is an obvious source of water, snowpack is just as important as it makes up one-third of our water supply, storing water during the winter months and releasing it as melts into our rivers and reservoirs during spring and summer. Record low precipitation levels have subsequently resulted in our reservoirs being significantly below capacity, many well below 50 percent. Locally, our region has been tagged as an area of “exceptional drought”, the most severe on the drought severity spectrum, and our local water purveyors are all in at least Stage III Drought Emergencies. Our communities have a phenomenal track record of water conservation and efficiency efforts, as evidenced by Goleta Water District’s low per capita water usage and the City of Santa Barbara’s significant reduction in water use, but mandates and restrictions are being imposed as never been seen before, and for good reason. Lake Cachuma, our area’s largest water source is at 28% capacity, with just enough water to get us through the year, maybe. And while the local water purveyors are securing other sources of water and developing supply plans, we all really need to do our part to conserve water. Like our local communities, UCSB has a strong history of implementing successful water conservation and efficiency programs. Since the early 90’s, UCSB made a firm commitment to water conservation, during both the dry years, and importantly the wet years. The installation of efficient fixtures, expansion of the recycled water infrastructure, efficient irrigation practices, behavioral change campaigns, and active water conservation planning are just some of the practices that have been introduced to the campus over the years. 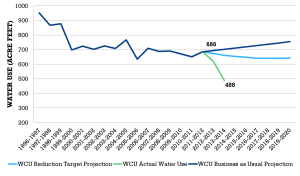 UCSB has already achieved the University of California Office of the President mandate for each campus to reduce potable water use 20% per capita by 2020. Recent overall campus potable water consumption (based on 2008-2011) averages are approximately 25% less than in 1996-1998, and 38% less over the same time period when adjusted by a per capita metric. In fact, this past year, UCSB reduced potable water consumption 21% when compared to the previous year, the largest single reduction in the past decade. So, as one of the few institutions in the UC System to have achieved this goal and water savings of this magnitude, one may ask is UCSB done? The answer is no. UCSB is committed to continuing our proactive approach to water conservation and efficiency efforts through exploring new programs, practices, and technologies that will continue to minimize our water footprint. And at home, the response needs to be similar, shorter showers, brown lawns, California-friendly landscaping, gray water reuse systems, and efficient fixtures need to be the norm, not just in dry years, but in wet years too. Collectively our water conservation and efficiency efforts will help to build more resilient communities, ensure that we have the supplies to meet the needs of future generations, and will reveal the most cost-effective source of water yet, water conservation itself.